Belgian Linen is known to be one of the finest in the world. But what makes it so different?
And why should you look for the label when you purchase your next linen?

What does it stand for?

Belgium and linen go way back

In Ancient Roman times, the Celtic ‘Morini’ tribe lived in the ancient province of Belgica. They knew how to impress the Romans with their flax cultivating and weaving capacities. Roman intellectuals (such as Pliny the Elder) praised the quality of the linen. Linguists even claim that the name of the province originated from the Celtic word for flax: bel’ch.

A thousand years later, Flanders’ cloth production came in decay because of the Hundred Year’s War in the 14th century. Artisans had to adapt and from that point on, flax would become the primary fiber cultivated in Flanders.

A label of quality

After World War II, flax farmers and weavers founded the Belgian Linen Association. This association is also part of the Masters of Linen club, uniting all linen weavers in Europe.
In 1960, the weavers agreed upon establishing a benchmark for all Belgian mills, in order to protect and promote the high quality of the linen. More than 50 years later, the label has become the reference for those seeking the finest linen in the world.

It goes without saying that Belgian Linen is a known and appreciated brand in Belgium. What’s more, the Belgian Royal Court has used Libeco‘s Belgian Linen for quite some time. After many years of supplying the Royal Court, we have been Royal Warrant Holder for over 10 years now. We wear this recognition with pride and our discretion is an absolute requirement. The favorite linen of His Majesty is one of our best kept secrets… 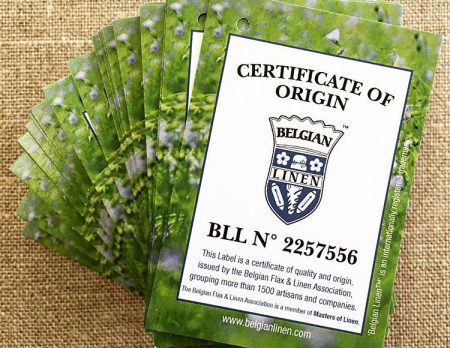 Why should you look for the Belgian Linen label when you purchase your next linen? We’ll tell you about the importance of the label in this post.

The Libeco Story is one of ups and downs, of prosperity and struggle, about people who believe in their most precious raw material: the flax fiber.